Earlier this year, Alex convinced me to let go of the Bahamas for our first beach trip together since our rain-riddled honeymoon in the Exumas. We settled on Turks and Caicos; a small island chain off the southeast end of the Bahamas.

I guess you could say I’m stubborn. 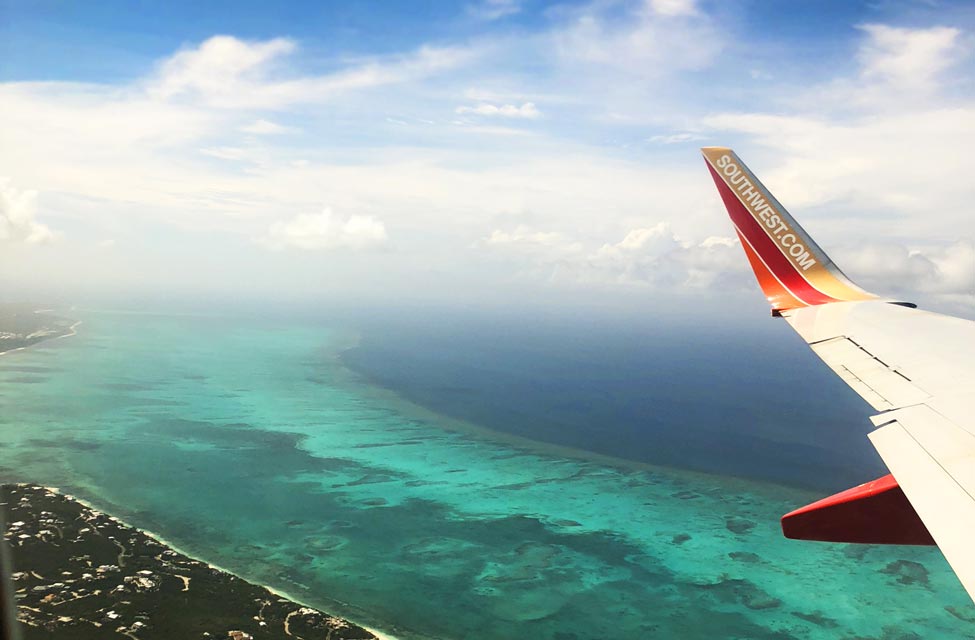 We flew Southwest from Dallas to Fort Lauderdale, then took a connection to Providenciales. This path is very similar to the one we take to get from Dallas to the Bahamas Out Islands, albeit a bit less complicated since we were able to stay on the same airline.

Since this was just a 5-day break and not a luxury vacation, we kept things simple. We booked our stay at Ocean Club West and took the hotel van from Providenciales’ open-air airport to the resort.

We checked in, downed a complimentary rum punch and hopped on the hotel’s courtesy bikes. Aside from dodging a pretty impressive tropical storm for a few days, the trip was exactly the vacation I was desperate to experience.

Here are my recommendations, based on our favorite spots around Provo broken down into restaurants, beaches and activities! 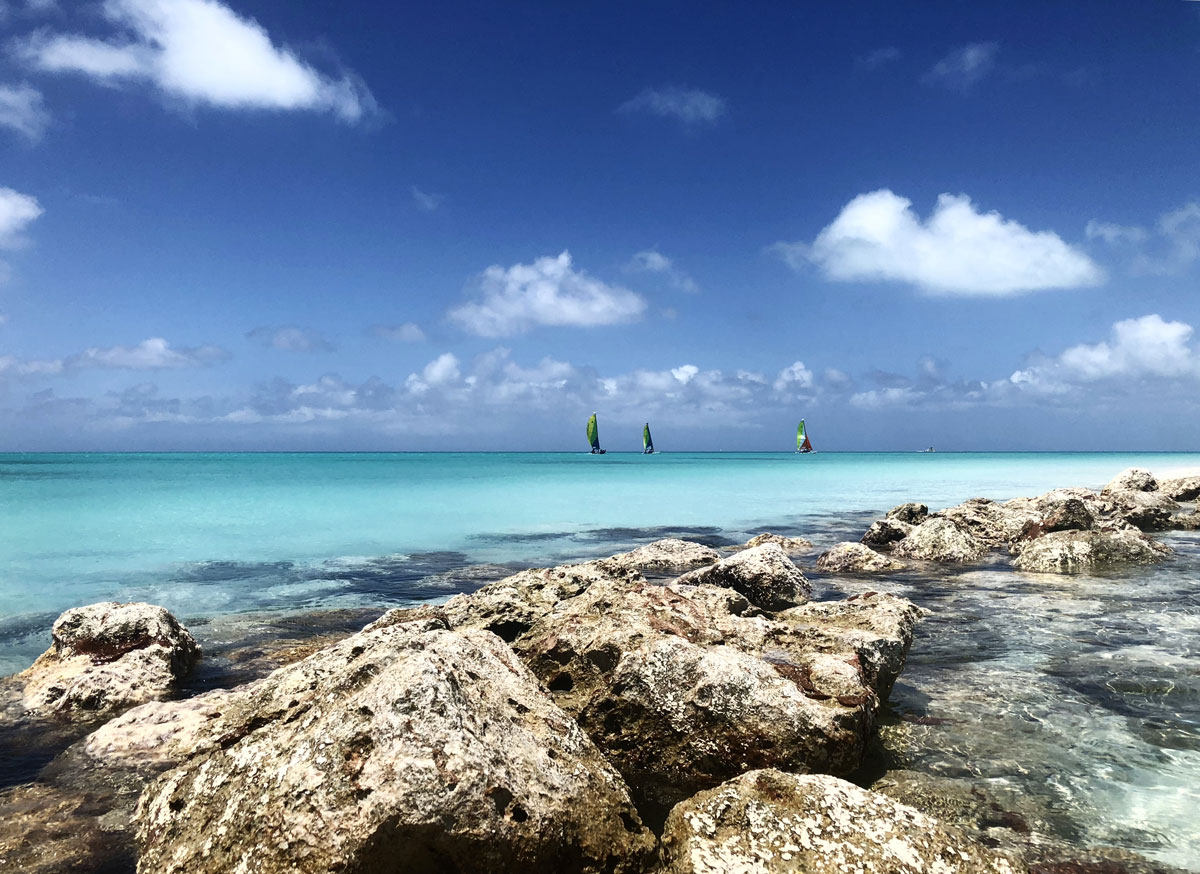 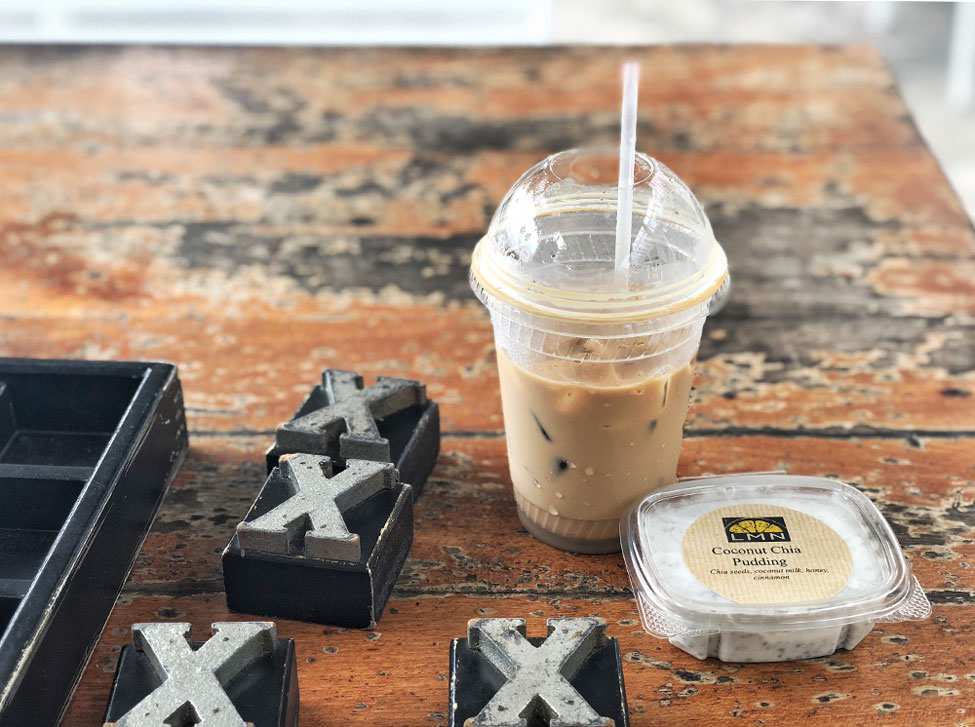 If I could pluck this coffee/gift shop off the main strip alongside Grace Bay and magically transport it to my neighborhood in Dallas, I would. Aside from not having coconut milk, their lattes were out of this world, as was everything else. We spent every morning here, sipping coffee and snacking on cinnamon chia seed pudding on the front patio. I have no qualms about saying Lemon 2 Go makes the best coffee on the island.

Mr. Grouper’s is a very humble building a quarter mile inland from the beach. It’s away from the resorts and feels very authentic compared to the other restaurants we visited. I had the curried shrimp with coleslaw (because they ran out of peas and rice) and was pleasantly surprised by how delicious it was! The dish had the perfect amount of spice, and the coleslaw was bright and fresh. Much better than the standard pale cabbage and shredded carrot slaw you’d find anywhere else!

This may seem odd, but we were thoroughly impressed with the restaurant at our sister hotel, Solana. We went to Hemingways and a couple of other highly-recommended restaurants, but found this one to be so much better! Alex ordered a creamy bowl of clam chowder to kick-off our dinner, which was as rich and luscious as we hoped. For dinner, I ordered curried grouper over veggies, which was perfectly tender. And while the food was great, the view of Grace Bay at sunset was the highlight. 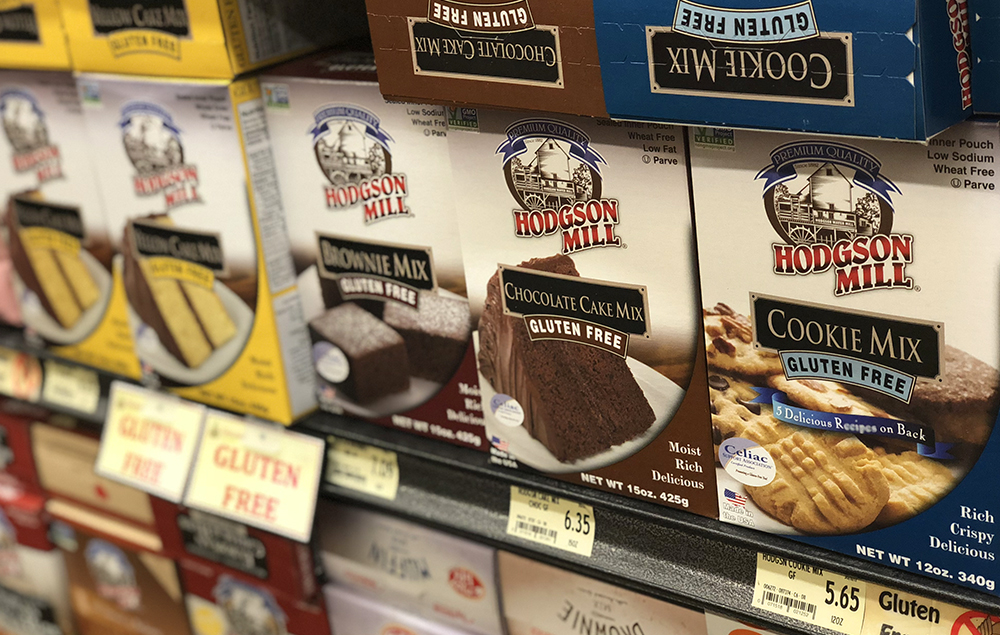 Our room came equipped with a kitchenette. Since finding gluten-free options while traveling can be an issue for me, we knew that acquiring some in-room snacks was a wise idea. We biked to the grocery store with an empty backpack and soon realized that one bag wouldn’t be enough space for all the greatness they had to offer!

Graceway was fully-stocked with fresh fruit and veggies, an expansive wine selection, pantry staples and gluten-free goodies including Schär white bread and cookies. We purchased sandwich items, cereal, snacks, and wine, which led to more calories consumed than we planned or expected! 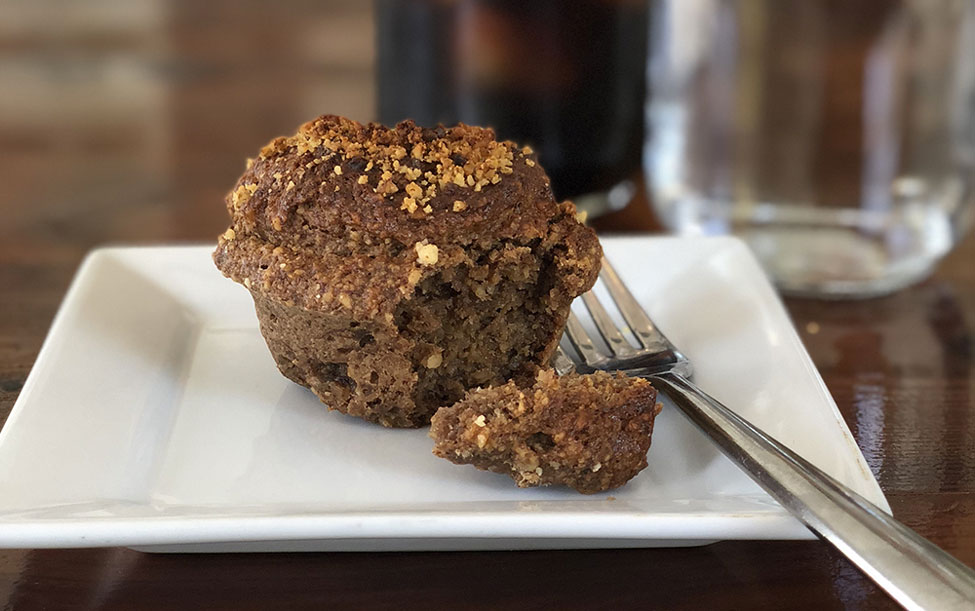 We didn’t eat a full meal at Retreat Kitchen, but it’s absolutely worth mentioning! They specialize in vegan, vegetarian and gluten-free options including soups, salads and pastries. I had two of their gluten-free morning muffins, which were perfect! 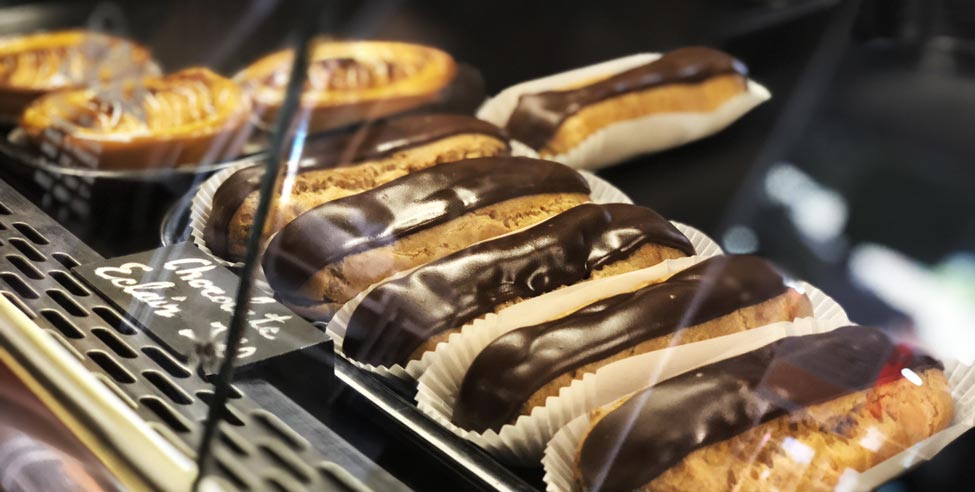 Note: Caicos Bakery has NOTHING gluten-free, but I’m adding it to my list because my husband loved it. He stopped her two or three times for sandwiches and eclairs. The woman who owns the bakery is French, which shines through her pastries. They all looked divine. I wish I could try one myself! 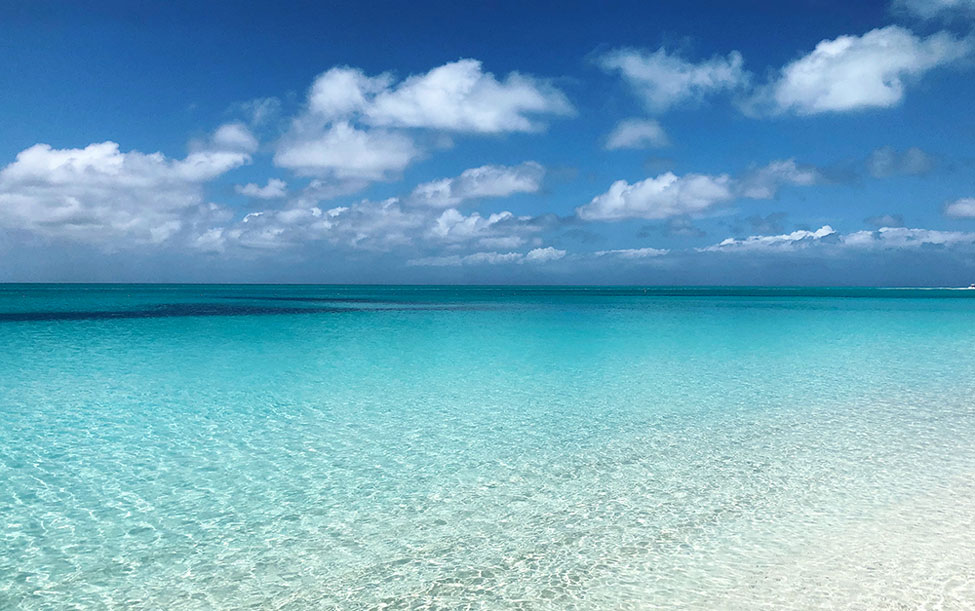 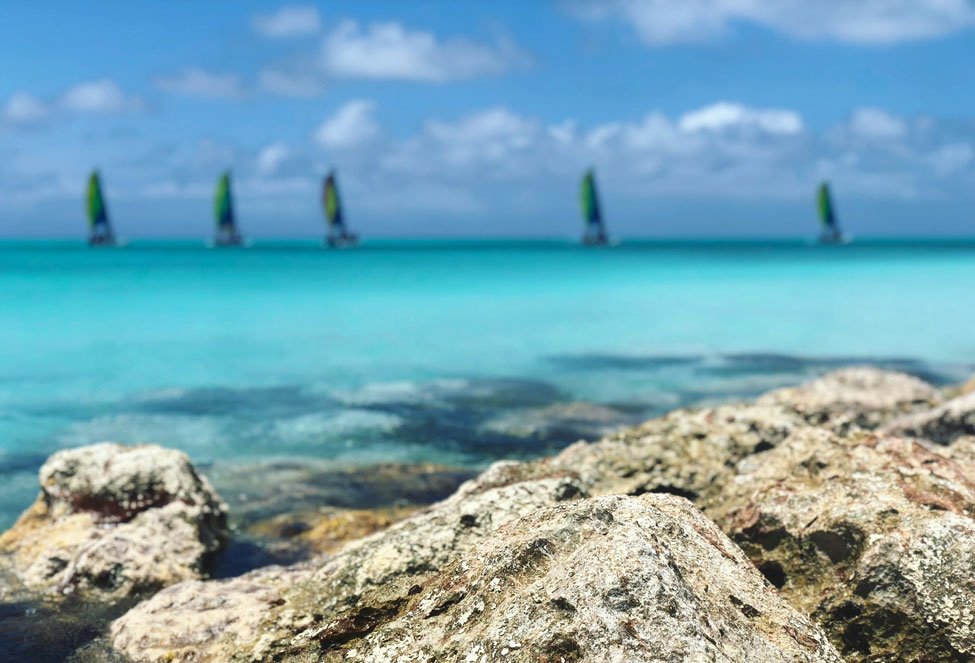 Grace Bay is the undisputable main attraction in Providenciales for a good reason. It’s stunning! From Ocean Club West, the soft, white sand beach feels like it goes in both directions forever. The way the shallow water reaches out from the beach creates a gradient of pale turquoise, bright aquamarine and deep blue. Its position on the North side of curvy Providenciales helps the water stay calm and clear even when the surrounding beaches are churning. 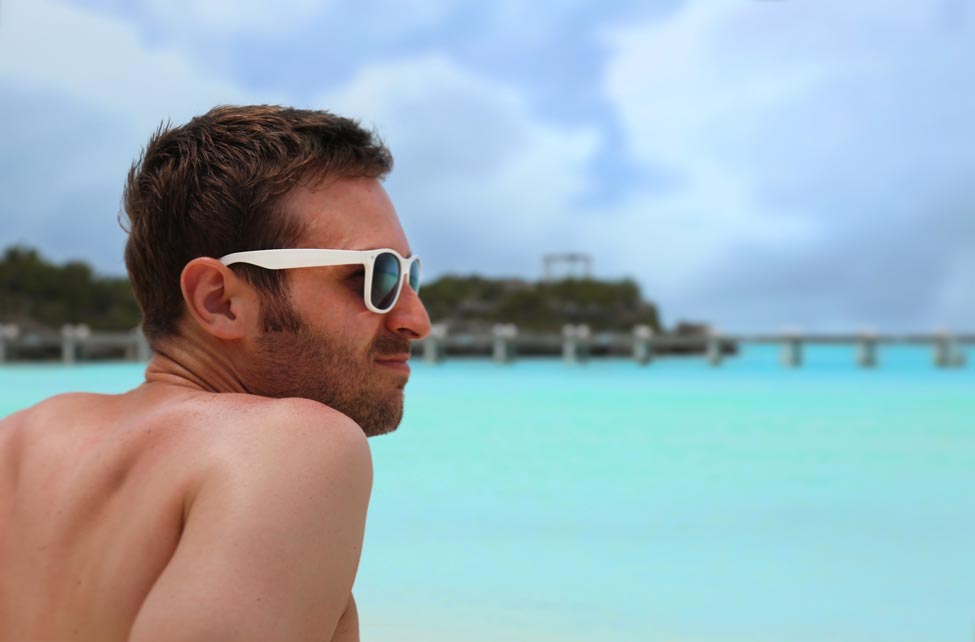 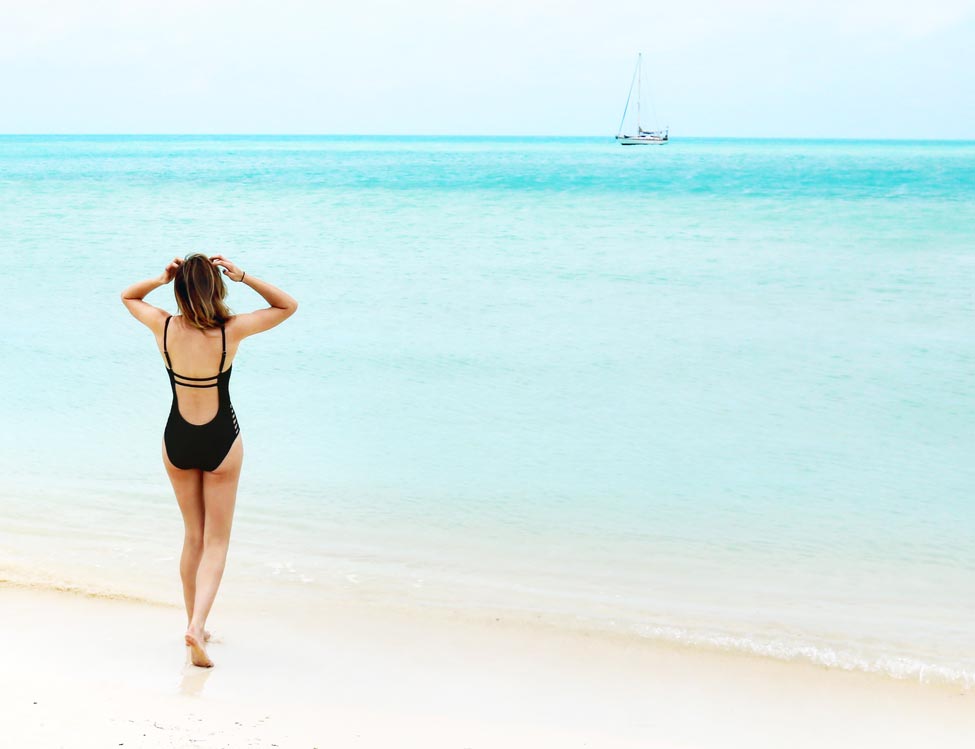 The day we ventured out to Sapodilla Bay (in a rental car), the weather wind was crazy. Though it wasn’t as calm as Grace Bay, Sapodilla was still worth visiting. The waters were mostly as calm and light turquoise. It felt a more low-key than Grace Bay and was much smaller. We had fun sitting in the sand, looking out at the sailboats anchored beyond the beach.

We stopped by Long Bay Beach on the same day as Sapodilla.
It reminds me of Surfer’s Beach in Eleuthera in that it’s known for having more waves. It was so windy when we visited that the sand ran us off pretty fast. We stood around to watch someone kitesurf for a few minutes, but couldn’t stand the way the sand was pelting us. Aside from being windy and rough, Long Bay Beach is also harder to reach. The roads were unpaved, and the potholes were rough. If you’re looking for a tranquil, Caribbean paradise, this beach probably isn’t for you (but it might be amazing on a calm day)! 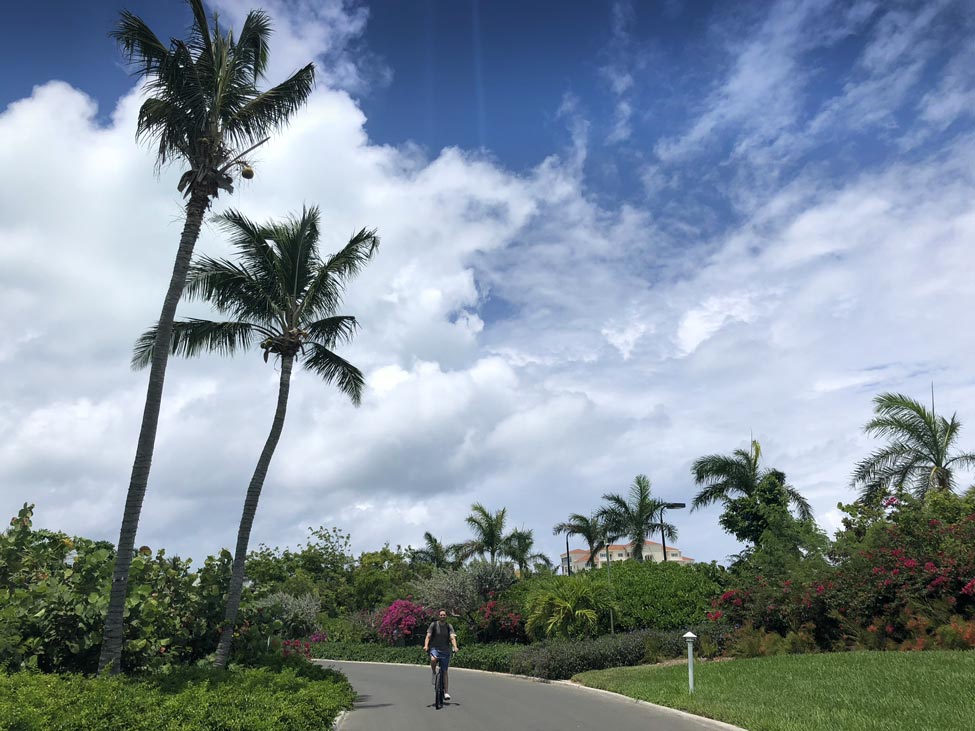 To be perfectly honest, I prefer islands where the most common mode of transportation is a golf cart. Providenciales didn’t have that, but biking around the island was a blast and a great way to get in some exercise (cause we wouldn’t have gotten any otherwise).

Take a Puppy to the Beach – Potcake Place K9 Rescue 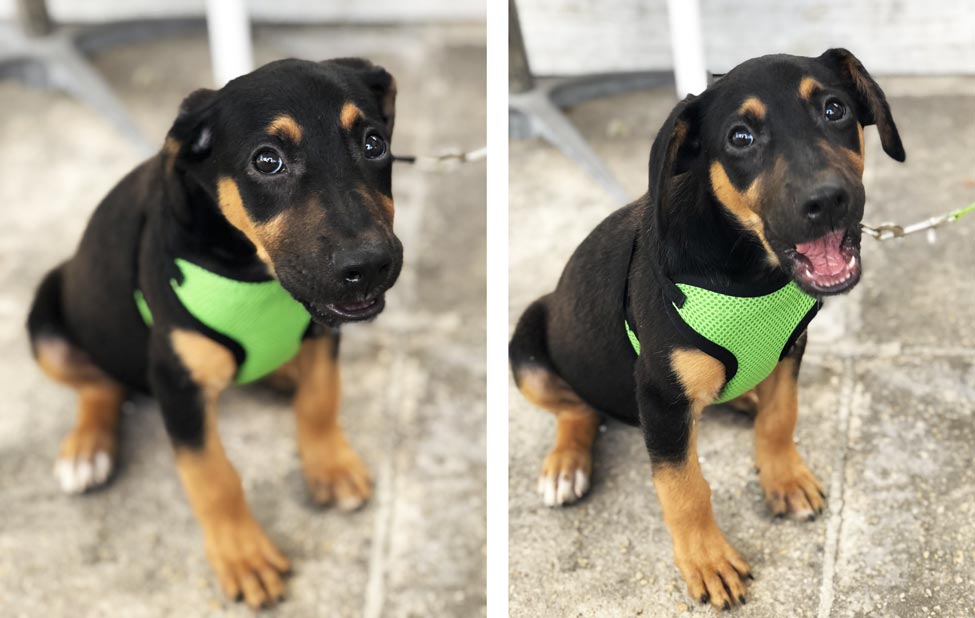 In my mind, there is one thing about Turks and Caicos that makes it truly unique amongst the islands I’ve visited. That thing is puppies! The Potcake Place K9 Rescue works tirelessly to ensure that stray potcakes (a “breed” of mutt specific to TCI and the Bahamas) find loving homes primarily in the United States. One of the ways they socialize their rescues and provide them with exercise is by letting tourists “check them out” for a couple of hours.

At certain times of the day, you will see happy little potcakes strolling around the island with visitors everywhere you look! If you make it to the rescue early enough, you can be one of the lucky babysitters, too. Learn more about the organization and their “take a puppy to the beach” program on their website.

However, I found the prices for excursions and fishing trips in Turks and Caicos to be a bit ridiculous. I considered booking a trip to take Alex fishing like we did during our engagement trip to Harbour Island with Spanish Wells Fishing. With Captain Ryan of SWF, we paid around $500 for a half day of reef fishing. The same trip in Provo would have cost us more than double! So, our trips back to Turks and Caicos will be about relaxing – we’ll save fishing and outings for my beloved Bahamas!