It’s warm out, but not sweltering like last time I was here. Wouldn’t mind either way.
Meredith, my best friend and traveling companion, ran back to the room to grab some extra sunscreen before climbing into the boat. SPF 30 isn’t going to cut it out here. I start wandering down the Valentine’s Resort and Marina dock, slowly, since I know we’re early. Even though Bahamians are notorious for keeping island time, Ryan’s already waiting for us – and the burger he ordered from the bar. 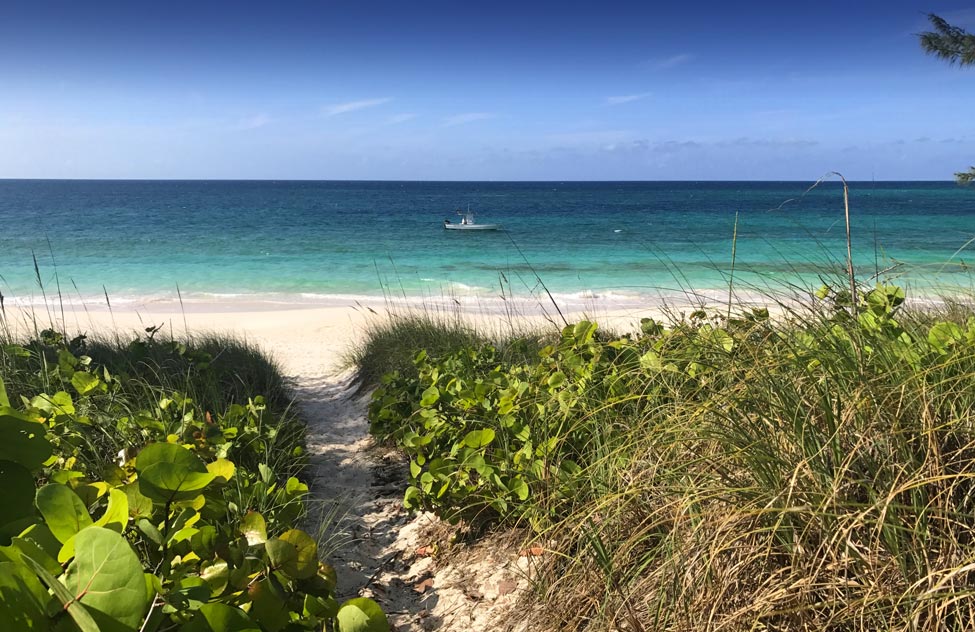 I met Captain Ryan Neilly, the owner of Spanish Wells Fishing, a couple of years ago, right here in the same spot. He was mine and my fiance’s fishing guide back then, but today he’s taking a couple of girls to see what Eleuthera has to offer. We’re starting at Harbor Island, the island we’re staying on, which lies 57 miles from Nassau. It’s perfectly placed in the warm, turquoise waters of the Atlantic Ocean and decorated with friendly faces, pastel-painted buildings and world-famous Pink Sands Beach.

We drop down into the boat and toss our water-sensitive belongs in the small compartment next to the captain’s chair. Ryan gives us the run-down on what the first half hour will hold; a quick trip to the sea turtles and a stop at the island he lives on to abandon his 6-foot-long Yeti cooler with a dead barracuda inside. Deep sea fishing by morning and leisure boating by noon. I’m sure he’s unbearably jealous of my office job back in Dallas.

The First of a Million Sea Animals

The sea turtles make you wonder why lawn mowers have ‘turtle’ and ‘rabbit’ modes since sea turtles can hit 22 MPH underwater. Not bad considering that the average person only hits about 14 MPH in a dead sprint. The turtles pop their heads up briefly to catch some air. They aren’t overwhelmingly concerned by our presence, but if the boat comes too close they scatter. So, we drift onwards.

Up and down, hair flipping into knots. I think it’s only been 60 seconds, but we’re stopping again. Ryan’s pointing at wobbly, maroon splotches resting in the sand. Before I can figure out how he’s reached the bottom, he’s pulling up a starfish. Setting it on the cooler in front of us, he starts explaining how it moves. Apparently, with little suction cups that slip out from between rocky barbs on its bottom side. I can’t imagine what that must look like. This star ‘fish’ is hard as a rock. Hollow, but not in the least bit flexible. We pose for a couple pictures, then Ryan tosses it over the side, instructing us to watch as it drifts back and forth through the water. It slowly exhales the air we forced it to endure, making its way back to the ocean floor.

Now, let’s get rid of the cooler. Meredith tries to help Ryan lift it out, but he reminds us that he’s a ‘big boy’ with his friendly, Bahamian accent. I think this is the first time I’ve stepped foot on Spanish Wells, but I can’t really remember. It’s clean. We borrow the restroom, choose our snorkeling gear and run back to the boat. Meredith and I are awkwardly whispering about how nice a piña colada would be now. I’ve been Facebook friends with our guide for quite a while. He’s conservative and a father of kids our age… I’m wondering how inappropriate it would be to ask for a detour to visit the Sandbar Bar and Grill, but I do it anyway. It was the right move. There’s nothing more satisfying than creamy coconut, pineapple and rum when you’re skipping through the Caribbean water. Besides that, the open-air bar has a backdrop that tops those seen in this year’s Sports Illustrated Bikini Issue and Kendall Jenner’s Instagram posts, combined.

Back on the boat.

Swimming Pigs of Eleuthera in the Bahamas

We’re moving slowly so we don’t overturn these drinks. And still, because there’s a boat lingering around our next stop – the other swimming pigs. Yes, you’ve heard of the swimming pigs. Those snub-nosed barrels that splash around in crystal clear water, begging for beer and corn chips. The original sea-swimming swine are in the Exumas, a three-hour boat ride from here. Ryan tells us about his friend, who bought the new pigs from a farm and dropped them off on this secluded beach. A brilliant move. I’ve seen the original swimming pigs, and there (used to be) a lot of them. They’re not quite as cute as you’d expect after seeing them on the Travel and Leisure Facebook page.

They run towards us as the chip bag rattles.

We’re off the boat, wading towards the pigs, then running back. Not trying to lose a finger over a stupid chip, but they would take it. It’s funny to watch them wander around, nosing things. One pushes his snout into my leg, just to see if anything’s there. We’re tossing chips and trying to get the right picture – and it’s hilarious. One of them is running through the trees, scratching his sides on everything he sees. Rabies hasn’t made it to the Bahamas, so it can’t be that. Ryan says the pink ones have been “red as fire” from the sun. I think I recall reading that they put sunscreen on the other pigs, but I’m not too sure if I believe it.

Ok, back on the boat again.

Snorkeling in the Bahamas

Leaving the pigs, we see large splotches of deep blue and light turquoise. The winds picking up, so Ryan pulls behind a tiny island so we can hop out amongst the reef. We’re both pretty terrified. To us, 8-foot-deep, perfectly clear water is alarming. We jump in any way, but I let Meredith go first. She thinks I’m jumping with her, but I’m sneaky like that. But five seconds after, I’m in too. Trying not to panic, I paddle around slowly, breathing heavily through the snorkel. We see big fish, small fish, deep purple sea fans, coral and neon colors beneath the crystalline water. This kind of aquatic diversity would cost thousands in a man-made tank, but we’ve jumped right into it for the cost of a boat ride. The waves jostle us around (barely), but Ryan assured us he knew how to save us from sharks, so we’re feeling pretty good. Or maybe I was since Meredith decided to get back in the boat.

Stop number seven might be my favorite. In the morning the sandbar ascends out of the water, but right now, most of it is only inches below the ocean. Perfect for walking through the warm shallow water… and taking pictures for Instagram. We can see it stretching on so we look back to Ryan. He says we could walk for half an hour, straight through the middle of the sea. If we didn’t have an agenda, I would. We keep our eyes down, and each of us finds a perfectly formed sand dollar. Mission accomplished, so we’re going to head back to the boat… again.

Preacher’s Cave and the Eleutheran Adventurers (Not us.)

Coming back around the east side of Spanish Wells, there’s a cave called Preacher’s Cave.

It got its name from the prior residents, a preacher and his followers. They fled Bermuda to find religious freedom, and unfortunately (or maybe fortunately) shipwrecked on the neighboring reef, the Devil’s Backbone. They drifted their way to safety and sought refuge in the cave. According to Ryan, they became the original ‘Eleutheran Adventurers,’ which you might translate to freedom seekers.

Anyway, it’s time to jump ship and check out the cave ourselves. This beach isn’t tranquil like the others, so we have to jump out a few feet from shore to keep the boat off the sand. Outfitted with nothing but swimwear and sandals, we walk up the dunes, through the mangrove leaves, and down the path. The only things standing between us and that cave are 500 feet of sand, a wasp and a brown snake. Running like the brave, squealing girls that we are, we make it into the cave and promptly turn around to return to the boat. Too much wildlife to encounter in a bikini.

Time for another uncoordinated whale-roll back into the boat.

We think we’re going back to Valentine’s, but Ryan has another plan. After cutting through the wind and the choppiest water of the trip, we slide onto another small, tranquil beach and tumble back into the sand. Meredith fully submerges herself in the water, eyes closed. The perfect time for a photo op. She looks over at me and laughs hysterically, realizing how comical she looks bobbing against the sand.

Okay, so tired. Must leave. Back on the boat!

Better than an Olsen Movie

We’re soaking up the last few minutes and Ryan shouts, loudly. ‘Look at the dolphins!’ We’d talked about how nice it would be to see dolphins earlier in the day but knew the odds weren’t in our favor. Yet, here we were, with a pod of six right in front of us. I don’t think this boat ride could be any better… and I’m right. Watching (read: videoing with our phones) for a few minutes more, and we’re finally heading back to the marina.

We look half as cute as when we stepped onto the boat. Wind-blown, exhausted and completely amused, we give Ryan a couple of side-hugs and head back to the room. I know I’ll be back next year.

No Older Articles
Next Article

11 Places To Visit in Waco Besides Magnolia Market

How To Deal with Post-Travel Depression

The Definitive Guide to Harbour Island, the Bahamas